A simple way to broadcast through Twitch 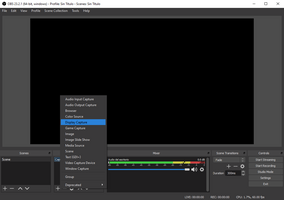 Advertisement
OBS Studio (Open Broadcaster Software) is an application that lets you record your video games and broadcast yourself through the Internet using services such as the popular Twitch.tv.

To set up Open Broadcaster Software so you can broadcast your games through the Internet, you just have to get the stream key from your Twitch account, which you can easily do from your dashboard.

From the settings in Open Broadcaster Software you can choose the resolution, frames per second, and audio outputs. In addition, you can change the video coding system and set keyboard shortcuts.

An important step into broadcasting with Open Broadcaster Software is creating a profile. To do this, you just have to right-click on Source, and add the game you want to broadcast. It's that easy.

Open Broadcaster Software also lets you record your games and save them on your hard drive. To do this you have to change the settings from broadcasting to saving on local device. This way, you can record any game in MP4 format.

OBS Studio is an excellent broadcasting application that you can use to record your games and share them in a really simple, quick, and easy way.

By Andrés López
How to make videos of your Android games

One of the biggest problems when trying to capture videos directly on your Android device is that it causes serious bottleneck especially when you try to shoot in real-time. This occurs even more so when using an app specifically designed for rendering video and both the app and the game are running simultaneously. Thankfully, there are tricks for improving the quality of both of them among which apps that run from an Android emulator for PCs and capturing with a desktop tool designed with this in mind like Open Broadcaster Software.
See more

Free Screen Video Recorder
Record videos of your screen or take print screens with one click
Streamlabs OBS
Broadcast online with all the frills
Bandicam
Records everything that happens on your screen, even video games
ManyCam
A funny webcam application
Action!
Record everything happening on your PC, even videogames
FlixiCam
ActivePresenter
Take screenshots and screencasts in a simple way
Microsoft Expression Encoder
Advertisement